Once, I went with my family to South Africa. It was 2009, a year in which my phone’s camera wasn’t of the best quality (hence the bad photo quality). One of the things on our wish list was going on a safari to see the Big Five: the lion , the elephant, the buffalo (or wildebeest), the rhino and the leopard.

Going on a safari is an exhilarating experience. You are always alert, always on the lookout for new kinds of animals. And that adrenaline-infused excitement that pumps through your body when you spot them is priceless!

What I really loved was seeing an elephant family taking a bath. We stopped to look at them for a long time. We also had a little adventure with an elephant who had decided he wanted to take a walk on the road, no matter which obstacles he would encounter along the way. The car behind us had to drive backward on the curvy, bumpy road. And we? We chased them to take pictures!

This wasn’t your typical safari, though. We drove around in a red Nissan, you know, in a car that you usually wouldn’t expect to see inside a natural reserve. Talk about a red flag! Anyways, we and the car made it in and out safely.

We got to see a lot of different animals, too: zebras, giraffes, impalas…

When we were not in the park, we were staying at the Bakubung Bush Lodge, which is right on the border of the park. You can actually see the animals walking past your breakfast table. Pretty amazing, it was!

I liked the safari experience more than going to the zoo. First of all, because the animals are not in cages but walking freely in their real, natural environment. Second, because you feel like you participate in some way. For example, at Pilanesberg (which is more intimate than Kruger Park), they asked all the visitors to look out for “wild dogs”. If you saw one, you should indicate where exactly you spotted them. This way, the rangers could find out how many of the wild dogs were still living in the park.

So did we see the Big Five in the end? Almost! We saw a lion, elephants, buffalos, a pair of rhinos… but for the leopards I’ll have to go back someday!

Is going on a safari and seeing the Big Five on your bucket list too?

Pin it for later! 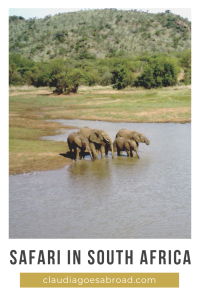